Taking Jesus with us on the ride of life

Children in church can be both a blessing and a challenge. And from my vantage point in the choir loft, 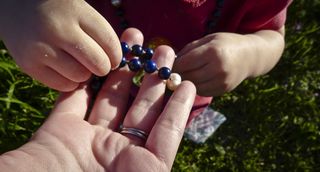 I've seen it all. But nothing tops the Sunday when a young family with several young children in tow took a place in one of the first pews, right in front of the entire congregation, seating their most gregarious child on the end.

I noticed when they first walked down the aisle that this little boy, maybe five years old, was carrying rosary beads in his hands. As a mother of six sons I winced a bit, remembering even rosary beads can be an unintended weapon in the hands of a young child.

At first he was fine, running the beads in and out of his hands, as if he was actually praying. But before long, he had discovered the “rosary bead spin.” Propelled by the weight of the crucifix, the beads circled faster and faster in his rotating hand until he lept out into the aisle with what looked like a small propeller in his little fist and yelled, “Hang on Jesus, we’re going for a ride!”

A delighted laugh rolled through the congregation and even the celebrant laughed out loud.

On the way home from Mass, with a foolish grin on my face, I considered how the whole scene was like a metaphor for our daily lives. With so many ups and downs, and things often spinning out of control, any of us could be the one yelling, “Hang on, Jesus!”

The image came to mind again recently when I was visiting my son and his family in North Carolina.

My almost three-year-old granddaughter loves to climb, jump, swing, and do just about anything a nervous grandmother would hate, and my son happily obliges her.

I was worried to death that my son’s hands would slip or he would trip over his own feet or a million other scenarios only an anxious grandmother could imagine, but all my granddaughter wanted was, “Do it again, daddy!”

“How could she want to do that again?” I thought to myself, but I realized she wasn’t afraid because she trusts him completely.

On my long drive home to New Jersey, I began to think about Mary and her unfailing trust in God.

Mary could have easily thought that her life was beginning to spin out of control when the Angel Gabriel visited her to tell her she was going to have a child, and not any child, but God’s child.

Surely, before that moment, Mary had plans for how her life was going to unfold. I don’t imagine her plans included a visit by an angel, or giving birth in a stable, or following her son to the cross, perhaps remembering Simeon’s words that the “a sword will pierce your own soul, too.”

How many times throughout her life did Mary have to consciously put her trust in God?

How many times in our lives do we need to do the same thing, believing God is walking with us through some loss or illness or struggle, either our own or that of someone we love or for whom we care?

Certainly, the next time I feel like my life is spinning out of control, I will remember the Rosary, both for Mary and for one little boy who is a philosopher at heart!