The solid maple dining table is considered vintage now. If things go as I pray they will, it’s well on its way to becoming a cherished antique. 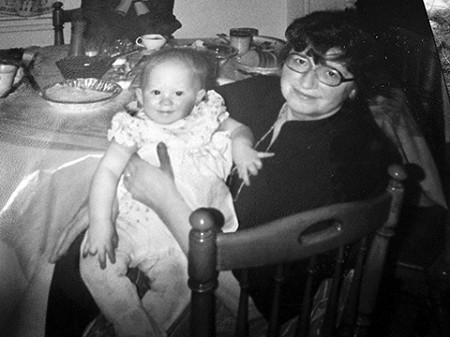 Just recently, it went out the door of my house, where it settled after my parents’ home was sold, never to return. Safely conveyed with its matching chairs by good friends to the young adult son of another good friend, it’s my hope that the table is once again destined to serve as a linchpin, connecting good meals and good conversation with good faith.

Such was its role from the time my mother settled on its wide, round, archetypal Colonial frame – the trend back in the ‘60s when it was new. She and my father found its shape appealing, I remember her saying to all of us.

No one sat at the head of the table or, by extension, at its foot. Everyone had good eye contact with each other. Best of all, our parents explained, sitting in a circle obstructed the view of the equally new, large color television set in the living room during meals, making conversation while perhaps not mandatory, certainly highly recommended.

Since those days, the table has taken a few hard knocks, from myself and my brothers, our friends and the frisky onslaught of the generation that followed us.

While well-intentioned rough housing – a burn here, a nick there – left marks over the decades, the table moved steadily through time, a bulwark that gathered family together into safe harbor at least once a day.

Getting it ready to leave for its new home as part of the “de-cluttering” process recommended by a home sale expert, I couldn’t help but revisit those meals.

The number of graces prayed over the food spread out on its surface like manna on holy days, holidays and Sacramental occasions is incalculable. The bread broken at that table among relatives and friends was something like loaves and fishes, especially in the lean times everyone shared at one time or another.

The image of my mother spreading clear plastic over the table when the grandchildren were just little tykes so they could make as much of a mess as they wanted and just have a good time stands out clearly in the mind’s eye. So does the picture of my dad engaging in philosophical conversations over snacks with our friends who sought out his company on Friday and Saturday nights.

When the table came to my house, I knew I inherited more than a round piece of wood on a sturdy base. I inherited a whole legacy, passed down by my mother and father of traditions that spanned, if not the world, at least Europe.

Blended together were ingredients that sparked the desire to know all about the people who created them, their customs, and their beliefs. It created a thirst to know what caused them to depart Ireland, Italy, the British Isles, the backwaters of the Austro Hungarian Empire and Scandinavia and stick it out in the face of terrible hardship.

The insights I gleaned from sitting with grandparents, uncles, aunts, cousins and our friends made it hard to give that table up. Still, it would have been much harder to send it off to a secondhand store or a garage sale, where its fate would have been unknown.

Just this week, while researching a story on how grandparents are coping with the digital whirlwind enveloping society, I found a number of stories on how the dining table had dropped from the single most important piece of furniture in the house to fourth or even fifth place.

After years of knowing the mom of the young man who wanted the table for his first apartment and her love of family and home, I have a feeling our family table will buck that trend.

PHOTO: BEARING WITNESS • This photo shows my mother holding her granddaughter, Jeannie, at the beloved family table. The table, now on its way to a new home, was at the center of more than one lifetime of memories.

This column first appeared in the Aug. 9, 2018, issue of The Monitor, official newspaper of the Diocese of Trenton.

Love, like bread, needs to be made and remade

My mother may not have been the best of cooks, but there was never a night or a Sunday afternoon 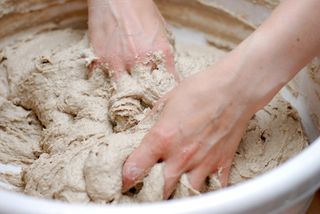 when she didn’t put a home cooked meal on the table in spite of working every day. She had some specialties, like a mean macaroni salad and an awesome salad dressing which still gets me rave reviews when I make it for family or friends. But when it came to making meatballs, she should have taken lessons from her sister, my dear Aunt Ginny.

Aunt Ginny’s meatballs were robust and tender, full of spices and homemade bread crumbs, and it seemed she always had a pot full of meatballs and sauce on the stove when my cousins and I came to visit.  On the other hand, my mother’s were small and hard and, I discovered by accident, made a loud thud if they fell on the floor.

My mom never mastered the art of making shankleesh like my Aunt JuJu and Aunt Jeanette, so I always relished the Sundays when a mound of this (mold ripened) cheese, covered with spices and drizzled with olive oil, was sitting on the kitchen table with warm Syrian bread when we came to visit after Mass. In spite of the fact that my five cousins were almost always there, along with any number of adult family members visiting from downstairs or down the street, there was always enough.

And who didn’t love when my Aunt Evelyn came to family gatherings at our house carrying a pot of stuffed grape leaves or a bowl of tabouleh? I swear I remember someone taking a good number of those stuffed rolls and hiding them in a separate container in the back of the refrigerator “for later” when most of the guests had gone home and the immediate family was left to clean up…and eat leftovers.

But I also learned from my mom how to make some of my favorite Syrian food: riz and lubee (rice and green beans), mamool (dough stuffed with chopped nuts and sugar), and pita bread.

I especially loved the days when she made bread. The anticipation of warm round loaves coming out of the oven, of pulling off a piece and spreading the inside with real butter and then having a good strong cup of tea was heavenly. But sharing it with family seemed to make everything taste better, and, certainly, the animated conversations of a house full of Syrian women, and the occasional courageous male of the family, was always memorable.

But I didn’t realize how much work went into the bread making until I went through the whole process by myself as a young married woman – the measuring the kneading, the rolling, and then the waiting. The experience was a lesson that helped me see the truth in a lovely quote by writer Ursula K. Le Guin:

“Love doesn't sit there like a stone, it has to be made, like bread; remade all of the time, made new.”

In looking back, I've realized her words are a beautiful description of the most important work of a family - love ... made, shared and made new all over again.

A little bit of love in a muffin tin Never be without a box of Jiffy muffin mix.

That was the bottom line for my mom, who loved to give guests something fresh from the oven.

As a mom who worked outside the home, quick and easy was a welcomed choice, and you couldn’t get any quicker or easier than Jiffy. Still, we loved the small yellow muffins hot out of the oven, sometimes with a pat of butter or a dusting of powdered sugar. But on weekends, when she had more time, she would sometimes make ma'amoul, a Syrian pastry, or Syrian bread – both worth the time and effort.

She was proud to share her ma’amouls with my cousins when family came to visit. I suspect there was a bit of a rivalry between aunts as to who could make the best ma’amoul, but if it meant my mom would keep trying to make it better, I was happy to be the taste tester.

Today, it’s the one family favorite I continue to make.

My mother-in-law, Muriel, on the other hand, preferred Entenmann’s. My sister-in-law once said to me, “If I ever bring an Entenmann’s cake to a party, shoot me!” We were both about home-made in our younger years. Not so much anymore!

I have often recalled the many animated, and sometimes, loud “discussions” that took place at the table set with a plate of muffins or ma’amoul or coffeecake, and sometimes wonder what it was like at Mary’s house during those years of Jesus’ grounding. (You know, after Mary and Joseph find the 12 year old in the temple after he was missing for three days? You think there’s not a reason why we don’t hear from him again until he’s 30? Mary was no push-over.)

Of course, my less than theological version of Jesus’ time at home, working as a carpenter alongside Joseph, does not do justice to a time that served as a profound experience of Jesus’ growing “in wisdom and grace,” before beginning his ministry at exactly the right time – God’s time.

Still, I wonder what it was like for guests at the home of Mary and Joseph while Jesus was there.

What did Mary serve her guests? What did she bake? Did she participate in the conversations? What were the loud discussions around the table?  And assuredly they would be loud if they were about religion! Did guests from Nazareth, their home town, chastise Jesus, as one of their own, for thinking he knew everything? What was the dynamic between Jesus and the guests, or even Jesus and Joseph?

So many questions, so few answers, other than those that might be expected from the culture of the time. But thinking about the unknown life of the Holy Family, reminds me that they were just that – a family, like mine, with the same challenges and joys. And Mary was a mother, like me, dealing with all the same issues and relationships that we each deal with, from putting muffins on the table to following a child to the cross.

I often think how good it would be to have Mary to tea, and muffins, and talk about the old days.