Our Lady of the Smile: A mother's smile can change things

Years ago, I saw a statue of Mary with a title I had never seen before - Our Lady of the Smile.

It wasn't until recently, after two years of struggling through a pandemic and deep distress for many people, that I made the effort to find out how that title was attributed to her.

It seemed now would be the perfect time to have recourse to a source of joy who may help us rediscover our reasons for smiling.

I learned about the life-threatening illness of St. Thérèse of Liseux when she was a child of 10. Her older sister, Marie, fell to her knees in prayer before a statue of Our Lady of Victory which was a treasured belonging of the Martin family. While she prayed for Thérèse's healing, the young saint saw an image of Mary, bright and warm and displaying a facial expression that filled the young child with joy.

From this moment, Thérèse was healed, and a devotion to Our Lady of the Smile (or sometimes Smiles) was born. 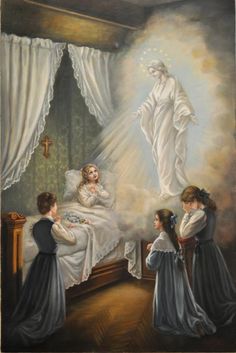 A prayer for Our Lady of the Smile

Gentle Mary, My Mother,
I place before you the worries,
hurts and hopes of my heart.
They shrink my soul and I feel heavy and hopeless.
Darkness closes in around me.
I reach out to you, bright Lady of Hope.
Smile on me.
Smile on my loved ones and the intentions I place before you.

Your tender smile works miracles and heals,
as you did with St. Thérèse, the Little Flower.
You are my true Mother.
You show the tender mercy of God.
Smile on me, Blessed Mother,
and all will be well.

Prayer to Mary, Undoer of Knots

Holy Mary, full of the presence of God, during your life you accepted with great humility the holy will of 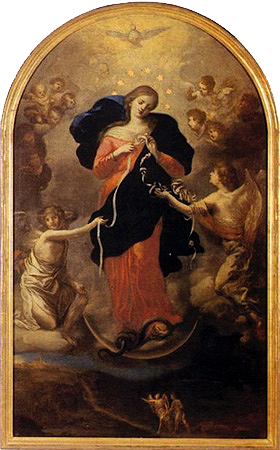 the father and the legacy of your Son our Lord Jesus Christ, and evil never dared to entangle you with its confusion.

Since then you have interceded for all of our difficulties as you did at the wedding feast of Cana. With all simplicity and with patience, you have given us an example of how to untangle the knots in our complicated lives. By being our mother forever you arrange and make clear the path that unites us to Our Lord.

Holy Mary, Mother of God and ours, with your maternal heart, untie the knots that upset our lives. We ask you to receive into your hands (here mention your prayer request) and deliver us from the chains and confusion that restrain us.

Blessed Virgin Mary, through your grace, your intercession and by your example, deliver us from evil, and untie the knots that keep us from being united to God. So that free of all confusion and error, we may find him in all things, keep him in our hearts, and serve him always in our brothers and sisters.

Mother of Good Counsel, pray for us.

A version of Pope Francis’ prayer to Mary, Undoer of Knots, to whom he has a great devotion.

More than a prayer, Hail Mary is a relationship

Not all relationships get off to a good start.

That was my relationship with Mary, our Blessed Mother. She was ever virgin, ever holy and, seemingly through religious art, 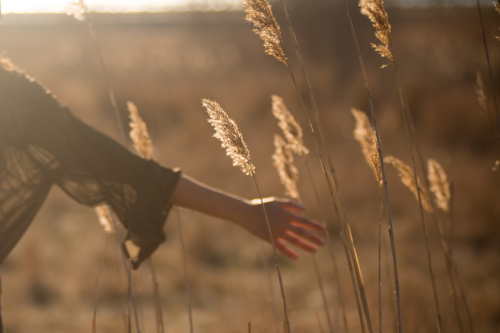 ever young – about as far away as possible from whom I saw myself to be as a woman, wife and mother, especially as I got older.

But a friend pointed out to me that my problem was really in not knowing Mary well enough. He advised me to mediate on her life, to learn more about what it was like to be a woman, wife and mother in her culture and time, to imagine her joys and her pains and to think of her as someone who would have a deep empathy for my own struggles.

I made him a promise that I would try, and so, little by little a relationship grew, perhaps not the same kind so many other Catholics might have, but a relationship none-the-less. We didn’t talk much, Mary and I, in the way I often talked to God, but I found that when I was troubled, fearful or in need of prayers for someone I would say “Hail Mary.” Sometimes that is all I would say, other times I would say the entire prayer. It became second nature.

I found a statue of Mary someone had given me as a gift and put it on my kitchen counter.  I put a small votive holder in front of it, and every night I would light a candle, thanking Mary for listening to my prayers and lifting them up to God, and then I would go through the litany of prayers still needed for family members. I still do this every night, and when things get really crazy, during the day, as well. It is a ritual that brings me comfort and settled, for the most part, with peace of mind.

But his past weekend one of my sons was diagnosed with pneumonia, and on top of it, was hit with one crisis after another in the space of 24 hours – a pattern that is frequent in his life, contributing to often overwhelming stress for him, and, subsequently, for me.

I felt like I was coming unraveled and decided he needed a St. Benedict medal to serve as a constant silent prayer for God’s blessing and protection, and for peace, which has been a Benedictine motto for centuries. I was searching on-line for what seemed like an hour for a medal that came with a chain, was affordable and would arrive within two days – since anything could happen in my son’s life within 48 hours.

Then, as we often do in times of extreme stress, I lost my composure and good sense.  I had to get ready for an appointment, couldn’t find what I was looking for and exclaimed out loud, “I need help! Please, someone help me find the medal I want for my son. He needs it.”

A moment later, as I hit the page button one more time, the perfect medal showed up on the screen. It was for a man, on a chain and would be delivered in 48 hours. I burst out in tears when I saw the name of the company which was offering the medal: Hail Mary Gifts.

I realized in that moment what a gift Mary has been to me, and to my son, who is the one most often lifted up in prayer. I realized that through my daily requests to Mary for prayer, I was moving through each day, no matter how difficult, with a renewed sense of hope. I realized that relationships take many forms, and while I do not yet pray the Rosary daily or preach Mary to the crowds, or even to family or friends, the relationship I have with her is still meaningful and fruitful in my life, especially in the absence of my own mother who died so many years ago.

I realize, also, that in the grand scheme of things, especially with so many people experiencing tragedy and profound struggles, wanting a medal for someone is not a cause for divine intervention. But I do believe that God intervenes, whether it is through the saints or angels, other people, or especially through Mary, when he wants us to have faith in his desire to be in a relationship with us.

In his May 10 General Audience, Pope Francis offered some inspiring words on our relationship with Mary: “We are not orphans: we have a Mother in heaven, who is the Holy Mother of God. Because she teaches us the virtue of waiting, even when everything seems meaningless. She always trusts in the mystery of God, even when He seems to be eclipsed by the evil of the world. In times of difficulty, may Mary, the Mother Jesus has given to us all, always support our steps. May she say to our hearts: ‘Get up. Look ahead. Look to the horizon. For she is the Mother of Hope.’"

Photo by Oliver Pacas on Unsplash