I’m a late-comer to the deliciousness of bread pudding, which has an ancient history and was often favored as a means to prevent wasting left-over 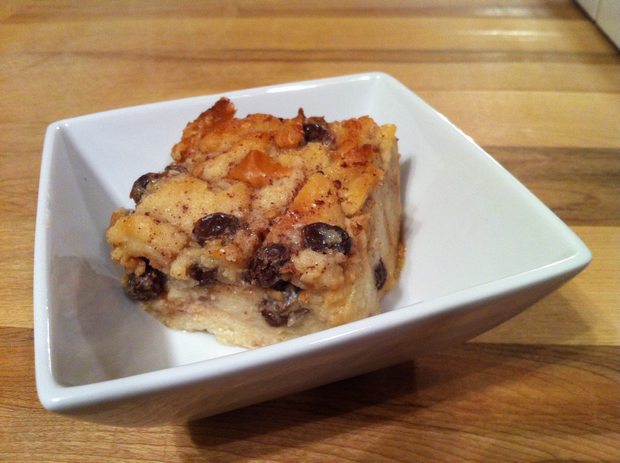 bread. In my home, with six sons, I guess we rarely had any bread left over!

Recently, my husband brought home a piece of bread pudding made by a friend for a get-together at their dance studio and it was wonderful. Then, when the diner we frequent offered bread pudding as a choice of desserts and my husband raved about it, I started to think I should check into making this dessert.

What I discovered in searching for a recipe was that they all use the same, or similar ingredients, but in varying quantities. Some recipes using 6 slices of bread call for 4 eggs, which I used, but others called for 2 eggs.  The quantities of milk and sugar also changed, even when the amount of bread stayed the same, so I’ve decided that trial and error and developing a recipe that works for each cook is the way to go.

I’m posting the recipe, adapted from a variety of others that I decided to use.  Since I am just starting this pudding adventure I am planning to try a variety of breads, including challah, which seems to get rave reviews.  More adventurous cooks, or just those interested in the history of bread pudding, may like to check out this article, “A New Story With Old Bread,” which includes a recipe using coffee porter aged in bourbon and rye whiskey oak casks.

With my recipe, several issues arose that I didn’t expect: the pudding was still very much liquid at the 45 minute mark of baking so I left it in another 20 minutes.  There is often a need to adjust baking time to your unique oven. I also think part of the problem was my choice of bread and the fact that it wasn’t dry enough, which, from what I read, is also the reason for the dramatic fall the pudding took when I removed it from the oven. It has to do with bread moisture levels. There’s an interesting article in the problem here.

I used a buttermilk bread which, while well past the freshness date, had been kept in the refrigerator. It was a heavy bread and still moist, a situation that apparently prevents the bread from soaking up enough of the milk and egg mixture and leads to excessive fall, like a poorly cooked soufflé!

The solution for using fresh or moist bread, according to more experienced bread pudding cooks, is to cube the bread and bake it in the oven for 8-10 minutes before using it in the recipe. This removes excess moisture.

In spite of the fall, the pudding was delicious, and worked well paired with whipped cream or a small scoop of ice cream.

Of course, my accompaniment of choice is a cup of English breakfast tea, which I find is great as an afternoon pick me up because I like a strong cup of tea and this is stronger than most of the common packaged black tea bags.

So what do I drink for breakfast? Irish breakfast tea! It is generally stronger than English breakfast tea. Check out this article for an introduction to the differences between Irish, English and Scottish tea.

½ cup raisins (or other dried fruit)