A page from Things My Parents Taught Me 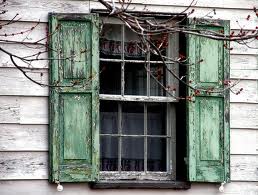 A mother never knows just how much attention her children are paying to her, but every once in a while she discovers they know her better than she thinks they do.

That was my discovery when my son, an eighth grade language arts teacher sent me an email explaining that they were writing memoirs in class, and, I guess while his students were writing, he was inspired to write a “Slice of Life” piece which was inspired by my style of writing.

Always the wise guy, as all my sons seem to be, he titled it as being from Things My Parents Taught Me. I share it, with a smile. He knows me – not just my style of writing – so well.

There’s a weathered house around the corner from me, where the bushes grow feverishly, aiming to devour the tattered relic.

Where a faded American flag flutters solitarily. It’s a home where a shutter gracefully dangles on paint-chipped cedar shingles. Where cracked windows are marked with the battle scars of childhood rock throwing. Where a gate sways on a hinge, drunkenly guarding the distant memories etched in the house’s history. Where a broken rocking chair sits on time warped planks, grayed by years of weather. It’s the kind of place many passer-bys would miss.

It’s the kind of place my mother would love.

She’s always had a penchant for gentle simplicity and for distinguished houses. The kind of house that needs some work and calls for that special someone to restore the beauty, to realize the potential. I think a dream exists for her – a dream of moving into a house around the corner and accepting the challenges that await, even if they are daunting.

She is not one to shy away from difficulty, to allow the task to leave its mark on her. She would see the house for what it could be – and who knows, maybe she would bring her husband to help, because it seems he’s pretty good with his hands, and I’m sure there would be a leaky roof and damaged walls and worn floorboards.

But I also know that it’s easy to miss that house, if we’re not looking for it. And it seems that often we, as people, don’t see it. We don’t see that we have become like the house around the corner, battered by many storms, grayed by time.

We don’t realize that we have left too many repairs unattended, that we have forgotten to make an investment in ourselves and in others. And as we examine who we are or who we have become, hopefully we see that, in the end, we are worth restoring.

I wish I wrote that.

Some  years ago, hanging near my computer in the little cottage where I did most of my writing was a lovely ceramic carving of the Prayer of Jabez, a gift from one of my sons many Christmases ago A small children’s devotional refers to the short, but powerful, prayer found in the Hebrew Scriptures as “the little ancient prayer about living big for God.”

The prayer reads: “And Jabez called on the God of Israel saying, 'Oh, that you would bless me indeed, and enlarge my territory, that your hand would be with me, and that you would keep me from evil that I would not cause pain.'  So God granted him what he requested” ( 1Chronicles 4:10).

What still intrigues me most about the prayer is not its success in enlarging Jabez’s territory but, rather, Jabez’s request of God to keep him from evil so HE would not cause pain.  For me, his request has been the focus of many times of reflection on my own life and shortcomings.

Soon after receiving the plaque, when I was dropping one of my sons off at school, I witnessed something that made me very sad and reminded me that evil comes to us in little, unsuspected ways, not always in what we do but very often in what we fail to do – most often when we fail to love.

In the car behind me a mom and her daughter had stopped in front of the school, as well. The youngster, a girl of about 12, leaned over to give her mom a kiss on the cheek, but the mom turned her head away.

The look on the child’s face was heartbreaking and it became obvious, as I watched their exchange for the next few minutes, that the child had done something to anger the mom.

I actually felt my throat tighten and tears form as I watched the daughter get out of the car and walk to the school building with her head hung low. And I wondered if I had ever done the same thing to any of my sons in a moment of anger or disappointment.

I wanted to run to her and give her a hug and tell her that her mom still loved her.

I wanted to explain how fear is usually at the root of anger and, for parents, the world is full of reasons to harbor fears for our children.

I wanted to make it all better, because that’s what moms are supposed to do, and it’s a hard truth for us to swallow when we can’t.

In that brief gesture of a mom turning her head away, a moment that child will most likely remember for the rest of her life, an evil triumphed over love.

But that doesn’t have to be the end of the story.

You see, as a parent, as a friend, as a child, and as a spouse, I have discovered another powerful little prayer that can keep us from evil: “Forgive me.”

Broken hands are a sure path to God

After my parents died and it came time to pack up all of their possessions, I found a small statue of Mary tucked away in the dark corner of a bedroom shelf – a memory from my youth. I had named her Our Lady of the Broken Hands.

She had not come through the years unscathed. Her hands, pressed together in prayer, were missing the fingers, and her torso, once broken completely in half, had been glued together by my dad at my mother’s insistence. She would never entertain the idea of throwing away her beautiful statue just because of a little thing like being broken in a few places.

For many years, Our Lady of the Broken Hands sat on my desk at work next to a second statue of Mary with a similar affliction. She has no hands. This small, delicately carved wooden statue was damaged in a move from one office to another. When I unwrapped her and saw that her hands were missing I could not help but stop to reflect on the two statues that now stood side by side in their imperfection.

They became, for me, a constant reminder of a painful and wonderful lesson – we, like they, are beautiful in our brokenness.

And broken we are, whether or not we are willing to admit it.

My broken statues of Mary remind me that my own imperfections are the vehicles for God’s work in me, and that with faith, patience, courage and passion we can each move beyond the limitations of our imperfections to fulfill all our God-given potential.

We are God’s creation, after all, as the very imperfect king, David, reminds us in his song to God: “Lord, you have searched me, you know me; you know when I sit and stand; you understand my thoughts from afar, my travels and my rest you mark; with all my ways you are familiar . . .You formed my inmost being; you knit me in my mother’s womb. I praise you, so wonderfully you made me; wonderful are your works! My very self you knew; my bones were not hidden from you, when I was being made in secret, fashioned as in the depths of the earth. Your eyes foresaw my actions; in your book all are written down; my days were shaped, before one came to be.”

There is a reason for our imperfection. It keeps us close to God and allows God room to work in us.

But since I am always in need of reminding, I will be happy to make room next to Our Lady of the Broken Hands for any less-than-perfect statue that needs a home.

“God expects but one thing of you, and that is that you should come out of yourself in so far as you are a created being and let God be God in you.”  Meister Eckhart